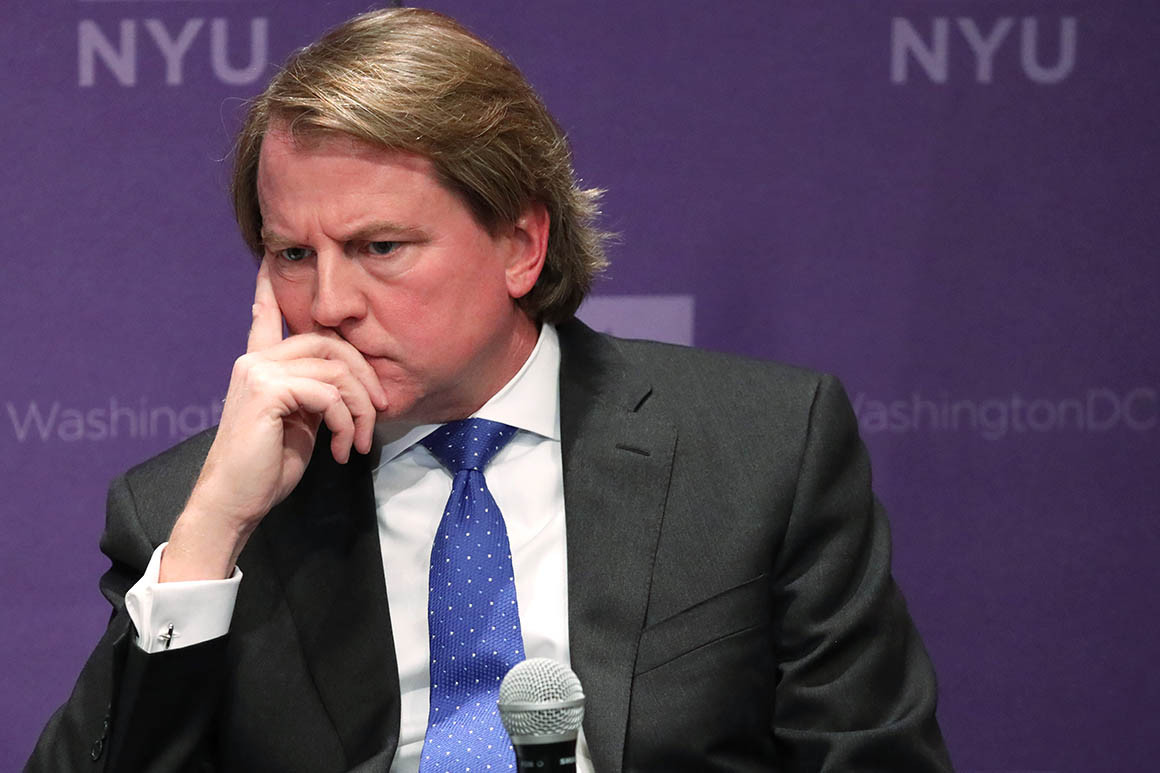 The House is open to the prospect of impeaching President Donald Trump a second time, lawyers for the Judiciary Committee said Monday.

House Counsel Douglas Letter said in a filing in federal court that a second impeachment could be necessary if the House uncovers new evidence that Trump attempted to obstruct investigations of his conduct. Letter made the argument as part of an inquiry by the D.C. Circuit Court of Appeals into whether Democrats still need testimony from former White House counsel Don McGahn after the votes last week to charge Trump with abuse of power and obstruction of Congress.

“If McGahn’s testimony produces new evidence supporting the conclusion that President Trump committed impeachable offenses that are not covered by the Articles approved by the House, the Committee will proceed accordingly — including, if necessary, by considering whether to recommend new articles of impeachment,” Letter wrote.

It’s the first impeachment-related filing by the House since lawmakers voted, mostly along party lines, to impeach Trump over allegations stemming from efforts to pressure Ukraine to investigate his Democratic rivals. It comes just hours after the Justice Department argued that the impeachment votes undercut lawmakers’ ongoing court case demanding testimony from McGahn, who was special counsel Robert Mueller’s central witness.

In a brief filed early Monday morning, DOJ lawyers acknowledge that the House’s approval of two articles of impeachment — focused on Trump’s alleged effort to withhold aid from Ukraine and his blockade of the House inquiry — do not render moot the legal fight over McGahn.

However, the Justice Department attorneys said the House Judiciary Committee’s decision to move forward with impeachment means there’s no longer urgency to resolve the House’s case. That bolsters the Trump administration’s argument that the courts should simply butt out of the legal showdown, the DOJ filing says.

“The reasons for refraining are even more compelling now that what the Committee asserted — whether rightly or wrongly — as the primary justification for its decision to sue no longer exists,” the DOJ lawyers wrote, without elaborating on that claim.

A second Justice Department brief in a related case — the Judiciary Committee’s demand for Mueller’s grand jury evidence — suggests without basis that the Judiciary Committee’s decision to advance articles of impeachment on the Ukraine scandal have effectively ruled out any effort to impeach the president based on Mueller’s evidence, therefore rendering the matter moot.

It’s unclear why the Justice Department argues that the committee has conceded that the Mueller impeachment investigation is over when House lawyers and lawmakers have described it as ongoing and active.

House lawyers indicated in advance of last week’s committee and floor votes that the panel planned to push on with its impeachment-related investigations. Democratic lawmakers who led the House impeachment inquiry have long contended that their efforts to gather more evidence would continue and that the timing of the impeachment vote reflected the urgency of the matter, not the conclusion of the effort to obtain witnesses and documents.

Letter’s new filing emphasizes the fact that nothing precludes the House from impeaching Trump again if it unearths new evidence, though no member of Democratic leadership has suggested such a course, particularly with a looming Senate trial and the presidential primary season imminent.

“McGahn’s testimony is critical both to a Senate trial and to the Committee’s ongoing impeachment investigations to determine whether additional Presidential misconduct warrants further action by the Committee,” he argued. Letter added that McGahn’s testimony is important aside from these matters, as the House considers legislation that might arise from the details of Trump’s conduct.

The filings landed Monday amid an ongoing struggle between Democrats and Senate Majority Leader Mitch McConnell over whether a Senate trial — whose contours remain unsettled — will include testimony from witnesses who never appeared before any House panel. Senate Democratic leader Chuck Schumer, in particular, has requested testimony from acting White House chief of staff Mick Mulvaney and former national security adviser John Bolton.

Justice Department attorneys argued in their new submission that the coming Senate trial is yet another reason for the judicial branch to stand aside.

“If this Court now were to resolve the merits question in this case, it would appear to be weighing in on a contested issue in any impeachment trial,” the DOJ legal team wrote. “The now very real possibility of this Court appearing to weigh in on an article of impeachment at a time when political tensions are at their highest levels — before, during, or after a Senate trial regarding the removal of a President — puts in stark relief why this sort of interbranch dispute is not one that has ‘traditionally thought to be capable of resolution through the judicial process.’”

“This Court should decline the Committee’s request that it enter the fray and instead should dismiss this fraught suit between the political branches for lack of jurisdiction,” the Justice Department lawyers added.

The DOJ filing was one of several submissions expected Monday in response to requests the appeals court issued about an hour after the impeachment votes last week, seeking clarification of the impact of the votes on the McGahn case and a parallel legal fight for access to grand jury secrets in special counsel Robert Mueller’s report on Russian interference in the 2016 campaign.

Both of those cases are expected to be heard on Jan. 3 by partially overlapping three-judge panels. The Justice Department, which brought the cases to the appeals court, is not urging any delay of those arguments. However, the DOJ lawyers said the court shouldn’t rush to get out a decision in the McGahn case — potentially leaving a ruling until after the expected impeachment trial is complete.