Niall Ferguson says Europe is becoming ‘the meltdown pot’ as a steadily increasing stream of immigrants breaks down political unity between EU member states and pushes voters back to national boundaries. Matteo Salvini speaks during an anti-immigration protest in October 2014 in Milan. Long-simmering tensions over the influx of migrants from outside Europe have come to a head in Italy, with the right-wing League allying with the leftist Five Star Movement to rein in immigration and resist pension reforms, with Salvini serving as minister of the interior. Photo: AFP

Israel Zangwill’s play The Melting Pot, first staged in Washington in October 1908, celebrates the United States as a giant crucible fusing together a single people.

It is rather hard to imagine a similar play being written about the European Union in the early 21st century. The influx of migrants would have precisely the opposite effect. Far from leading to fusion, Europe’s migration crisis is leading to fission.

Increasingly, I believe that the issue of migration will be seen by future historians as the fatal solvent of the EU. In 2016 alone, an estimated 2.4 million migrants came to the 28 EU member states from non-EU countries, taking the total foreign-born population of the union up to 36.9 million, more than 7 per cent of the total.

This may be just the beginning. According to economists Gordon Hanson and Craig McIntosh, “the number of African-born first-generation migrants aged 15 to 64 outside Sub-Saharan Africa [will] grow from 4.6 million to 13.4 million between 2010 and 2050″. The great majority of these will surely head to Europe.

Continental Europe’s population is ageing and shrinking, but European labour markets have a poor record when it comes to integrating unskilled migrants. Moreover, a large proportion of Europe’s immigrants are Muslims. Liberals insist that it should be possible for Christians and Muslims to coexist peacefully in a secular, post-Christian Europe. In practice, the combination of historically rooted suspicions and modern divergences in attitudes – notably the status and role of women – is making assimilation difficult. Finally, Europe’s southern border is almost impossible to defend against flotillas of migrants, unless Europe’s leaders are prepared to let many people drown.

Politically, the migration problem looks fatal to that loose alliance between moderate social democrats and moderate conservatives/Christian democrats on which the past 70 years of European integration has been based.

European centrists are deeply confused about immigration. Many, especially on the centre-left, want to have both open borders and welfare states. But evidence suggests it is hard to be Denmark with a multicultural society. The lack of social solidarity makes high levels of taxation and redistribution unsustainable.

In Italy, we see one possible future: the populists of the left (the Five Star Movement) and the populists of the right (the League) have joined forces to form a government. Their coalition is going to focus on two things: entrenching old welfare norms (it plans to undo a recent pension reform) and excluding migrants.

Last week, to much popular applause, Interior Minister Matteo Salvini turned away a boat carrying 629 migrants rescued from the sea off Libya. The Aquarius has now arrived in Spain, whose new minority Socialist government offered to accept its human cargo.

The populists are already in government in some way in six EU member states: Austria, the Czech Republic, Greece, Hungary, Italy and Poland. But across the EU, there are a total of 11 populist parties with popular support of 20 per cent or more, implying that the number of populist governments could roughly double. It’s just that few countries can match Italy for political flexibility. As a result, as Germans found after their last election, there is in fact no alternative but for the old grand coalition of centre-right and centre-left to limp onwards.

Limp is the word. Last week, the chancellor, Angela Merkel, collided with Horst Seehofer, her interior minister, who wants to turn away from Germany’s borders any migrants already registered in other EU states. Under the EU’s Dublin regulation, the country where an immigrant first arrives is in theory responsible for his or her asylum application. But, in practice, migrants can shop around for the most favourable destination, thanks to the Schengen system of borderless travel that Germany belongs to.

Merkel, Muslims and immigration: right and left square off on the streets of Berlin in rival protests

In Merkel’s eyes, Germany cannot opt out of Schengen without risking the collapse of the entire system of free movement. Her hope is she can cobble together some kind of pan-European package on immigration at the EU summit in Brussels at the end of this month. But it is not yet clear that her Bavarian Christian Social Union (CSU) coalition partner (which Seehofer leads) can go along with this.

The CSU has state elections approaching in October and fears losses to the right-wing Alternative fur Deutschland (AfD) precisely on the immigration issue. In any case, the chances of a coherent pan-European migration strategy seem remote. National borders look like a simpler solution. 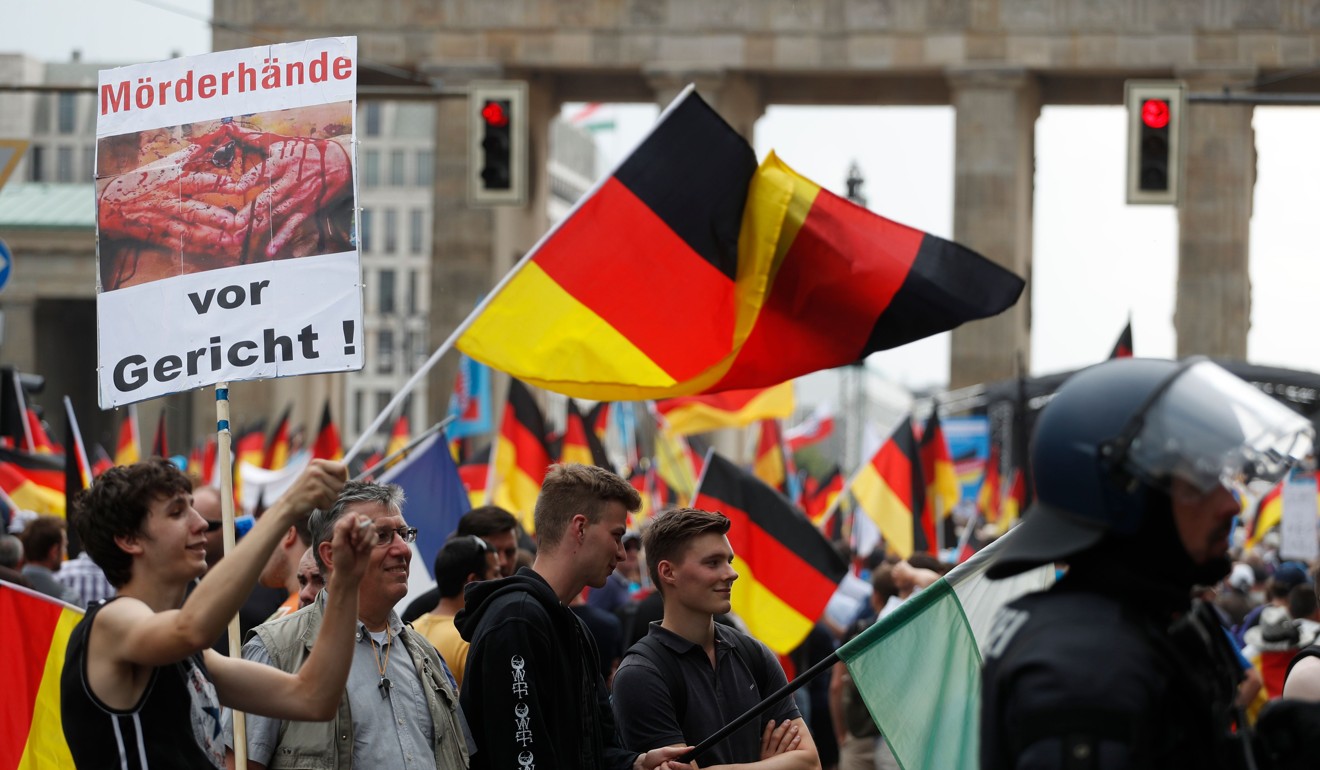 Right-wing AfD protesters wave German flags in front of the Brandenburg Gate in Berlin during the “demonstration for the future of Germany” in Berlin on May 27. Photo: AFP

I used to be sceptical of the argument that Brexit was about leaving a sinking ship. I am now reassessing my view. Even as the impossibility of reconciling Tory remainers and Brexiteers becomes an existential threat to Prime Minister Theresa May, events in Europe are moving in directions that seemed inconceivable just a few years ago.

In his upcoming book on US immigration, my brilliant friend Reihan Salam – himself the son of Bangladeshi immigrants – makes a bold argument: America must either restrict immigration or risk civil war as rising inequality and racial tension combine.

I hope Salam is right that the American melting pot can somehow be salvaged. But I have no such hope for Europe. No one who has spent any time in Germany since Merkel’s great gamble of 2015-16 can honestly believe that a melting pot is in the making there.

Niall Ferguson is the Milbank Family senior fellow at the Hoover Institution, Stanford