INDONESIA has been struck by two earthquakes at a magnitude of 4.6 and 4.9 near the region of Poso and the Gulf of Tomini, that stirred worries alone the Ring of Fire that further quakes could follow, it has emerged. 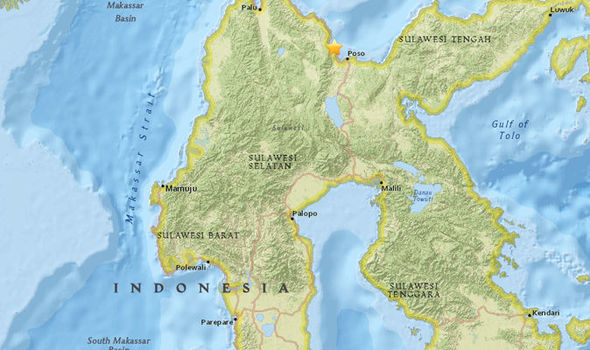 Indonesia has been struck by two earthquakes

The United States Geological Survey reported the earthquakes that emerged at 9.28pm GMT and 10.33 GMT.

Indonesia shook again at the end of last month after two earthquakes with a magnitude of 6 and 4.9 on the Richter scale that left the region of Ambon in fear that further quakes could erupt.

The earthquakes erupted shortly after the island of Bali saw a volcano eruption when Mount Agung sent a mushroom cloud of ash into the sky earlier this week.

Twitter user Rob Morrison posted a picture of the horrific ash emerging from the volcano and declared that it reached a height of 1500meters.

He wrote: “Mount Agung has erupted in Bali…height of the plume currently 1500m…being told at the moment ‘it’s not the big one’.”

Spokesman Sutopo Purwo Nugroho disclosed that there was “no follow-up eruption” following the mighty scare.

He said: “There was no follow-up eruption. The exclusion zone is at a 4km radius.”

The ash cloud has not yet halted flights in and out of the Indonesian island but the situation is being monitored by authorities closely.

The alert status was recently lowered following the implementation of its highest level during volatile activity in September.