ANGELA Merkel’s hopes of finally stitching together a coalition government in Germany have been thrown into chaos after civil war broke out amongst her Social Democrat allies following the resignation of their leader Martin Schulz.

Schulz quits as SPD leader after refusing to serve under Merkel

Fresh national elections are moving closer to reality with the SPD deeply divided over its support for backing Ms Merkel throughout a fourth term in office.

Mr Schulz’s decision to stand down was made after he lost the confidence of the party membership but a row immediately broke out over attempts to install Andrea Nahles as new leader without a contest.And the latest row threatens fresh instability for Mrs Merkel desperately trying to cling onto a fourth term in power.

Ms Nahles, the 47-year-old former employment minister, remains favourite to succeed Mr Schulz and become the first woman to lead the party but Simone Lang, the relatively unknown mayor of Flensburg, a small city near the Danish border, has announced she will stand and force a vote. 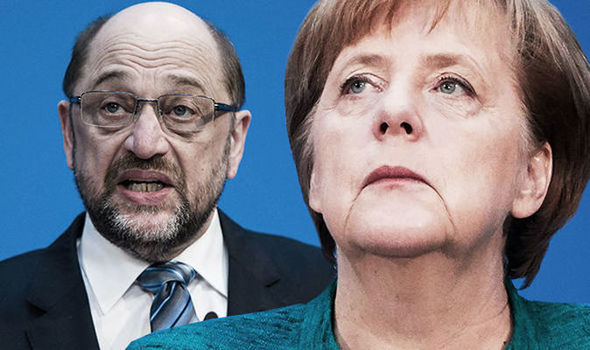 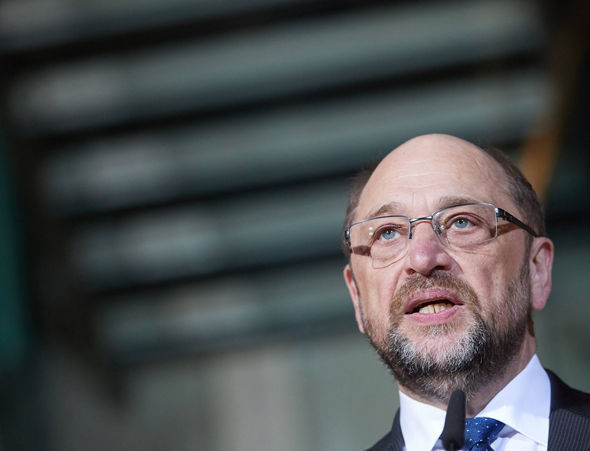 Martin Schulz stood down after losing the confidence of his party

Three powerful SPD regional associations have also declared they will block any attempts to appoint Ms Nahles as interim leader until an election can be held.The crisis comes just a week before the start of a postal vote by the SPD’s 460,000 members on whether to join a new coalition under Mrs Merkel.

The postal ballot on whether the party should go ahead with the agreement its leaders clinched last week to renew their power sharing alliance with Mrs Merkel’s conservative bloc opens on February 20. 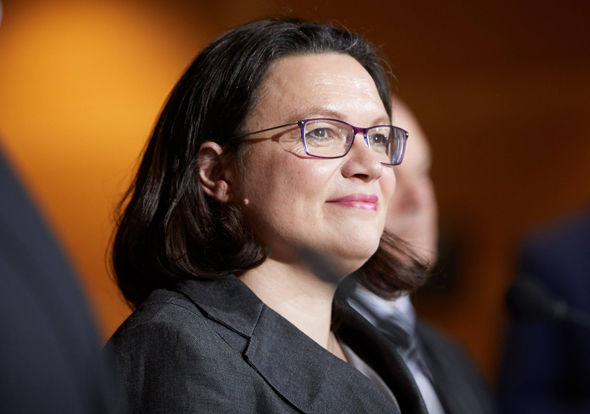 But EU reform, which has moved up the agenda with Britain poised to leave the bloc next year, is an issue that fails to resonate with many party members who are more concerned with jobs and working conditions.Many within the SPD harbour misgivings about sharing power with Mrs Merkel, believing the party should rebuild in opposition after suffering its worst result in last September’s election since Germany became a federal republic in 1949.

Results are due on March 4 and “no” vote would almost certainly mean new elections and yet more uncertainty in Germany.

Ms Nahles is trying to persuade wavering party members to support the coalition deal but it is not clear whether she will be able to do so as leader.

Kevin Kühnert, the leader of the party’s youth wing and chief opponent of a new coalition, said the way emerged as frontrunner without any meaningful debate was an example of the “old politics” he was trying to end. Ms Nahles is still backed by most of the current leadership and several senior officials have stepped in to try to restore calm.Malu Dreyer, regional prime minister of Rhineland-Palatinate, said: “The SPD cannot remain leaderless. It was right when Martin Schulz proposed Andrea Nahles take over the interim leadership.”

Ralf Stegner, the regional SPD leader in Schleswig-Holstein, said: “Each of us would be well advised to put the interest of the party and the country before their own ambitions. No more indiscipline in the SPD.”

But three regional associations led by the powerful Berlin local party said installing Ms Nahles as interim leader is against party rules and one of the current deputies should step in until members can vote on a new leader.

A formal election will now have to be held after Ms Lange declared her candidacy.