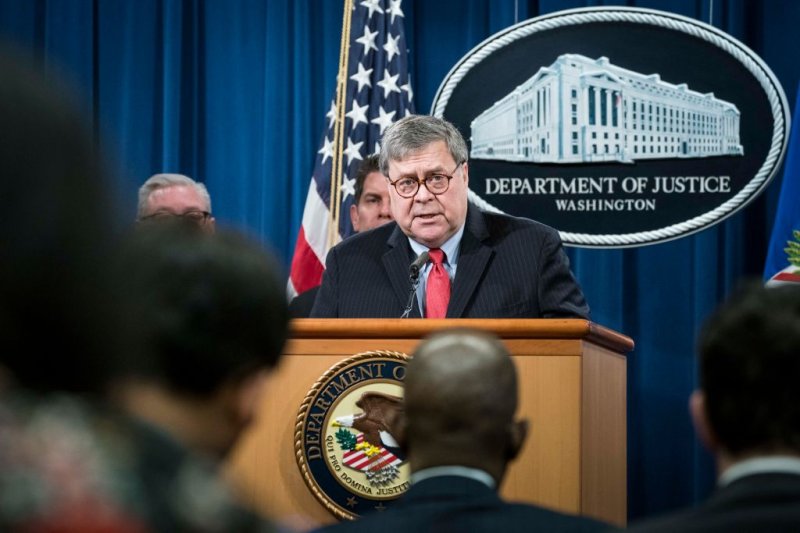 Attorney General William Barr participates in a press conference at the Department of Justice along with DOJ officials on February 10, 2020, in Washington, DC. -Sarah Silbiger/GettyImages

The U.S. Department of Justice (DOJ) announced three separate lawsuits on Monday against states and counties that have enacted immigration measures that the agency describes as “unlawful.”

DOJ is suing New Jersey over a directive by the state attorney general that limits state agencies from assisting federal immigration authorities, such as Immigration and Customs Enforcement (ICE). The state of California is also being sued after Gov. Gavin Newsom passed a state law banning all private detention facilities, including privately run ICE detention centers.

In Washington, King County is being sued over an executive order banning deportation flights from King County International Airport.

The lawsuits come the same day New York state officials announced it was suing the Trump Administration for blocking New Yorkers from Global Entry and other trusted traveler programs — a move the Department of Homeland Security (DHS) says was in response to the state allowing undocumented immigrants to obtain driver’s licenses.

In one of its lawsuit, DOJ is specifically targeting New Jersey’s decision not to honor ICE detainer requests, a request to local law enforcement to hold someone in custody if they are determined to be unlawfully present.

“According to the complaint filed today, on multiple occasions last year, New Jersey officials failed to provide information regarding the release dates of aliens who had been charged with or convicted of crimes,” DOJ said in a public statement. “New Jersey’s decision to obstruct federal immigration enforcement by refusing to provide such information is unlawful under the Supremacy Clause of the U.S. Constitution.”

In a 2018 announcement, New Jersey Attorney General Gurbir Grewal announced state officials should not assist federal immigration authorities unless otherwise required by law. The directive is one of several sanctuary policies that have been enacted by cities, counties, and states throughout the country aimed at creating trust between local law enforcement and immigrant communities.

It’s no surprise that the President, facing re-election, has suddenly decided to challenge the Immigrant Trust Directive, a policy we announced in 2018.

What’s disappointing is that my former colleagues at the Justice Dept have agreed to go along with this election year stunt.

Beginning this year, all privately run detention centers in California were banned, forcing ICE to transport immigrants in custody to facilities out of state, a measure DOJ says is “costly,” “will also heighten security concerns” and “may delay federal proceedings due to the out-of-state relocation of prisoners and detainees.”

DOJ claims the state law also “discriminates against the United States by granting exceptions for California that do not apply to the federal government or its contractors.”

The lawsuit against King County, Wash., also claims discrimination against federal contractors. In April 2019, King County Executive Dow Constantine issued an order announcing King County International Airport, also known as Boeing Field, would not support transporting unauthorized immigrants for deportation. As a result of the executive order, similar refusals at other airports in the Seattle area forced ICE contractors to travel to Yakima, Wash., for deportations, the lawsuit alleges.

WRITE TO JASMINE AGUILERA AT JASMINE.AGUILERA@TIME.COM.