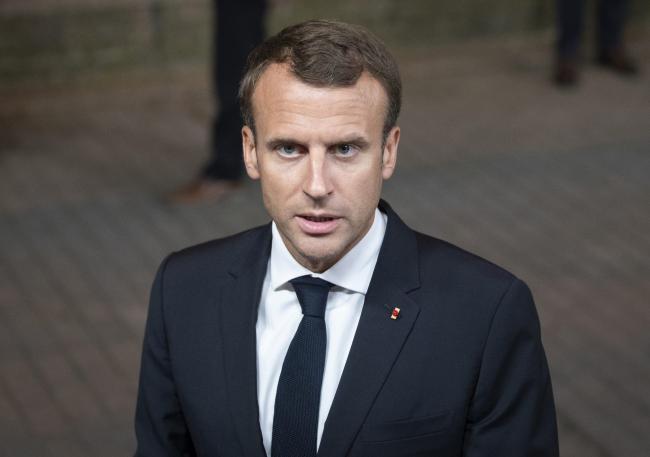 (Bloomberg) — Once Emmanuel Macron had clinched the French presidency last year, he headed straight to Berlin to forge a new future for the European Union with Chancellor Angela Merkel.

But despite all the joint briefings, the photo ops and sweeping promises, 19 months later that vision lies in tatters.

With Yellow Vest protesters sweeping through the streets of Paris and frustration at Germany’s foot-dragging mounting inside the ministries, Macron on Monday night changed tack. A string of costly spending promises signaled the end of his plan to win round German conservatives with France’s new-found budget discipline.

The new spending plans may push France’s deficit to as much as 3.4 percent next year, way beyond the EU’s 3 percent limit, Budget Minister Gerald Darmanin said Tuesday. They also consign any hopes of a grand bargain with Germany to the dustbin for the foreseeable future.

“Macron is battling for survival and he knows that he doesn’t get any kudos with the protesters by being friends with Merkel or having a European finance minister,” said Daniel Gros, director of the Brussels-based Center for European Policy Studies. “He’s thrown his European project out of the window.”

Macron’s decision to go it alone — pulling the rug out from European officials trying to bring Italy’s budget into line — is a far cry from the vision of a decade of European integration he set out at the Sorbonne University in Paris in September 2017.

The 40-year-old president had laid out a vision of a more assertive Europe, capable of standing up for itself on the world stage and protecting its citizens. But at the center of that was a stronger euro area, in which more risk sharing between members would make the whole bloc more resilient to financial shocks.

Although Germany was the first euro member to breach the 3 percent limit and poured public money into its banks before the EU tightened its rules, conservatives in Berlin were concerned that more risk-sharing would leave German taxpayers on the hook. Macron had bet that by reining in French spending he’d win more support.

While Merkel has been eager to strengthen the German-French axis with Brexit and populism undermining European integration, she was slow in responding to Macron’s calls on the euro.

Facing strong opposition from hardliners within her party and weakened by a disappointing election result, Merkel only half-heartedly followed Macron’s call to deepen the euro zone and did not embrace his proposal for a euro finance minister.

At Meseberg near Berlin, Macron and Merkel took their first tentative steps toward realizing that in June with a joint commitment to a euro-zone budget. But for Macron that was as good as it got.

The details thrashed out by finance ministers were far short of what France had hoped for. Instead of a game-changing budget that could bolster economies hit by shocks, ministers suggested it could be used for “competitiveness and convergence” — or helping poorer countries catch up. That’s basically an extension of the EU’s existing spending capabilities.

The disappointment runs both ways, of course.

Officials in Berlin have watched with concern, and a degree of resignation, as Macron’s domestic opposition grew. They have seen attempts to push through structural reforms in France blocked by mass protests time and again and see France failing to match the efforts of Ireland during the financial crisis and Germany in the early years of this century.

In Berlin, they see the measures that have been agreed as major concessions and they say the French let their expectations run out of control.

Given the skepticism about France’s potential to reform, Macron was deluding himself with his plan for a European finance minister and a euro area budget big enough to contribute to macroeconomic policy, according to one German official.

“The German conservatives seem to have been opposed to almost every element of Macron’s reforms,” said Jacob Funk Kirkegaard, a senior fellow at the Peterson Institute for International Economics. “That is the wrong approach in Europe.”

(Corrects spelling of town were pact was signed in 12th paragraph.)