As new opposition protests begin in Venezuela, the dictator announced that he would arm more than 300,000 Chavista militants. The Bolivarian Militia is made up of civilian Chavistas of all ages and without any training (Minpet).

As new opposition protests begin in Venezuela, the dictator Nicolas Maduro announced that he would arm more than 300,000 Chavista militants to supposedly “guarantee peace and a merry Christmas.”

The usurper announced that he would militarize the streets until 31st December as a kind of threat and provocation to the opposition that recently organized a march for this Saturday, 16th November. 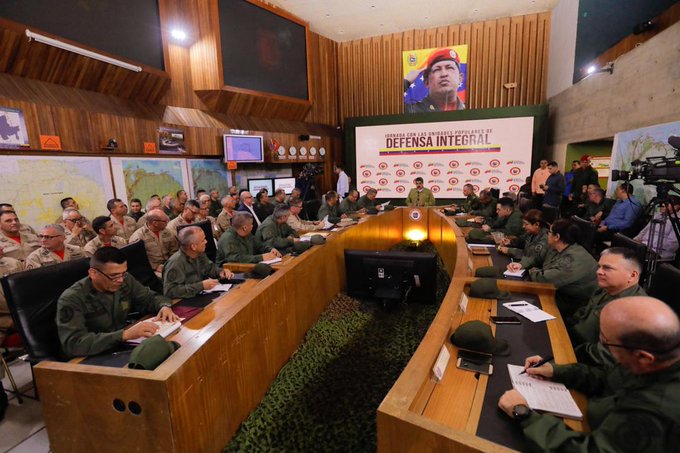 “Let’s activate the plan to strengthen patrolling and street surveillance to guarantee peace and happy Christmas in Venezuela,” Maduro said in a drill with Venezuela’s military high command.

The Bolivarian Militia is made up of civilian Chavistas of any age, and they often don’t have any training. According to statements by Maduro himself, there are 3,295,335 militia members of both genders who organize themselves in the communities in the so-called popular units of integral defense (UPDI).

“We have 321,433 rifles that we are distributing through the secure networks of the FANB for our militias,” he said.

Besides the Militia, there are armed collectives or paramilitaries in Venezuela, created and backed by the regime. These collectives have become terrorist organizations, parapolice of extermination, and control of the country. They attack protestors and intimidate rob and murder Venezuelans.

Maduro has been exposed and reported to the international court of justice for genocide, especially after he called the “collectives” to the streets to defend the revolution whenever there are anti-government demonstrations.

The Chavista collectives are dedicated to threatening, pestering, and shooting those who protest the dictatorship. These groups carry small and big arms and even use pipes to beat the demonstrators. Both the Bolivarian Militia and the collectives have become the armed branches of Chavismo.

The collectives are armed paramilitary groups created by the regime to fulfill a function of social control and to defend the Chavista regime. The role of these armed groups is to control the people so that they do not rebel.

The armed civilians are in charge of doing the “dirty work” under the protection of the National Bolivarian Police. They can shoot and kill and still have their peace of mind knowing that the regime will not punish them.

Other armed civilians: the prisoners and the ELN

An open secret was finally confirmed: imprisoned criminals in Venezuela live like kings, and the minister Iris Varela started to train them as soldiers.

Two years later, it was revealed that Varela had created parallel arms using prisoners as soldiers to defend herself and the revolution.

The Chavista minister proclaimed herself as the “commander” of her own battalion, for which she asked the regime to Maduro to supply about 30,000 rifles.

The presence of armed prisoners in Venezuela is well-known. According to reports of representative Jose Trujillo, convicted offenders liberated by the regime participated in the massacre in Santa Elena de Uairen on the border with Brazil.

On that occasion, Varela and the national coordinator of the Local Supply and Production Committees (CLAP), Freddy Bernal, placed approximately 100 prisoners at the disposal of the Maduro regime to “defend” the Chavista revolution.

Another criminal army made up of paramilitaries that are ready to defend Maduro is the Colombian guerilla National Liberation Army (ELN). The ELN has promised to be the first line of defense if there is a military intervention to overthrow Maduro.