Onboard, the USS Boxer (CNN)With short incendiary shrieks Harrier jump jets race across the USS Boxer’s deck and are soon gray dots in the sky. Seahawk and Super Stallion helicopters leap and land like gigantic insects, feeding on the mother ship. The tilt-rotor Ospreys, part-plane part-helicopter, come and go while the others in their flock nest, folded in gray ranks, along the edges of the deck.

It’s a bestiary any ark would be proud of. But the USS Boxer has more than just aircraft with animal names. It has a crew of 1,000 plus some 1,500 US Marines on board. And enough armor, dune-buggies, artillery, and even tanks to mount a small invasion. The hardware is stacked in hangars below decks.
On Thursday, it was taking part in a tense but routine mission in the world’s busiest shipping route as part of a three-ship expeditionary force through the Strait of Hormuz. Just hours after CNN left the ship, it downed what the US said was an Iranian drone that came too close, further escalating tensions between Washington and Tehran. A US Navy official said there were several other interactions between the US warship and Iranian military forces prior to the downing of the drone.
This week’s routine mission put the USS Boxer and its two accompanying vessels, the USS John P. Murtha and the USS Harpers Ferry, temporarily at the center of a potential storm as the US flexed the resources of the US Fifth Fleet at the US Naval Forces Central Command in Bahrain. If tensions boiled over, this fleet would be at the epicenter of a war that could indeed would, spread through the entire Middle East.
Onboard the USS Boxer, Marines train and maintain their equipment day and night alongside the crew. Many sleep in vast dormitories stacked six high in tiny bunks known as “coffin racks.” Their only diversions are the gym and more training. 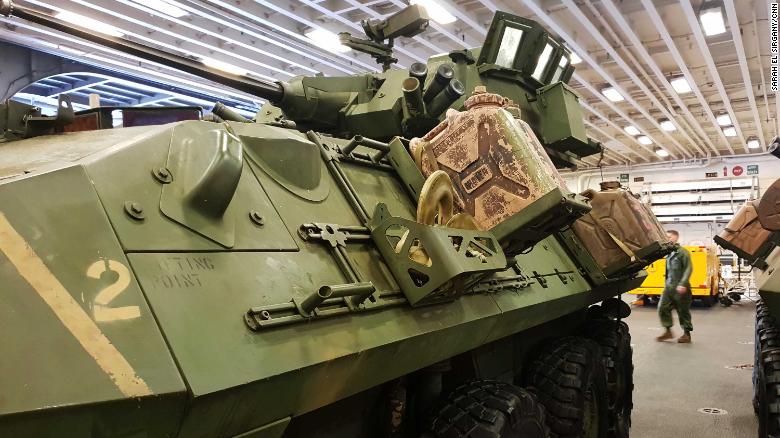 Tens of trucks, tanks, armored vehicles, hovercrafts, and amphibious vehicles are stored in the belly of the ship.

The US military is proud of the Marines’ wider doctrinal task to represent US national power overseas. In other words, it has to look impressive as it threads the needle of the Strait of Hormuz, letting Iran know just what the USS Boxer’s group is designed for and capable of.
The group’s commodore, Captain Jason A. Burns, said this week’s planned transit was an entirely routine enhancement to the US Fifth Fleet’s long-standing role in the region. And indeed, Iranian sailors in this always tense neighborhood are used to seeing such vessels over the years. But the routine was first shattered in May when four ships were mysteriously attacked by mines, which the US and UK have suggested came on Tehran’s orders.
In June, two more ships in the Gulf of Oman were also mined. Again, the US and the UK pointed their fingers at Iran. Since then every move, feint or mistake made by shipping in this region and beyond has been endowed with strategic meaning.
On June 20, Iran shot down a US drone over the Strait. Iran said it had strayed into its airspace, the US said it was over international waters. President Donald Trump called off a retaliatory raid against Iranian air defenses at the last minute, he said, after deciding that an estimated death toll of around 150 Iranians was disproportionate.
A few weeks later, a UK Navy frigate leveled its guns at Iranian gunboats that had attempted to maneuver a BP-owned oil tanker into Iranian waters. The encounter was seen as possible retaliation by Iran for the seizure of its own tanker, the Grace I, off the coast of Gibraltar. Grace 1 was suspected of smuggling 2 million barrels of Iraqi crude oil to Syria, in alleged violation of international embargoes on the Damascus regime.
In both cases, escalation to a wider conflict was avoided.
Thursday’s drone downing was achieved using electronic jamming, according to a US defense official. The craft had come within 1,000 meters of the USS Boxer and ignored multiple calls to stand down, President Donald Trump said.
Iran’s Minister of Foreign Affairs Mohammad Javad Zarif told reporters at the United Nations in New York Thursday that “we have no information about losing a drone.”

A return to worse days

A return to the days when US and allied navies escorted ships through the Persian Gulf and the Strait of Hormuz to protect them against attempts by Iran to block Iraqi oil exports during the Iran-Iraq war, would be a dangerous escalation.
The US Naval Forces Central Command and the Fifth Fleet were set up in Bahrain in 1995. They were designed to “command the afloat units that rotationally deploy or surge from the United States plus a few smaller ships that are based in the Gulf for longer periods,” according to the US Department of Defense.
The US Naval Forces Central Command is charged with managing the 33 nations who contribute ships to a coalition called the Combined Maritime Forces. This focuses on “defeating terrorism, preventing piracy, encouraging regional cooperation and promoting a safe maritime environment.”
The US is keen to put together a new “coalition” to ensure maritime security in the Gulf region against what Washington says are threats from Iran. But this coalition has proven harder to establish because many potential allies are so out of step with the US on Iran, and are keen to preserve the nuclear deal that Trump has torn up.
A Spanish frigate, the ESPS Méndez Núñez, recently left the Abraham Lincoln Carrier Strike Group, which is currently based in the Gulf of Oman and focuses on Iran. Spain does not support the US withdrawal from the anti-nuclear deal agreed with Iran in 2015.
Neither does Britain. And while the UK is sending a destroyer to the region, it has not indicated whether it would join in an Iran-specific force — especially when a coalition force already exists and even has a Briton as its deputy commander.

The consequences of a single mistake

Amid the fissile atmosphere in the Gulf and the Strait of Hormuz, a single mistake could unleash catastrophe.
Earlier this week, Javad Zarif, the Iranian foreign minister, warned of the high stakes in play. “All through history Iran has provided security in these waters,” he told CNN’s Fareed Zakaria. “The United States is intervening in order to make these waters insecure for Iran. You cannot make these waters insecure for one country and secure for others.”
“Do you believe that as a result of this — whoever is to blame — you could have an escalation which would result in a military incident?” Zakaria asked him. 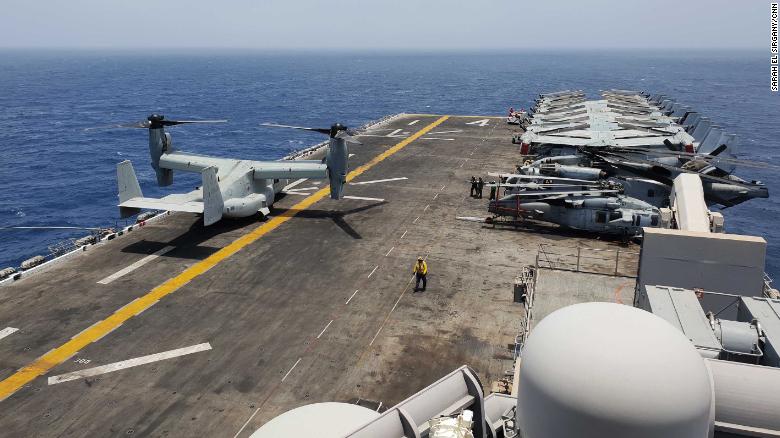 The USS Boxer’s flight deck covers 2.2 acres. On the flight deck and inside its belly, the vessel carries the following aircraft: The Harrier, the Osprey, the Sea Hawk and the Sea Stallion.

“In such a small body of water if you have so many foreign vessels, I mean accidents will happen…” the Iranian foreign minister replied, emphasizing that Iran did not want war and called on all parties to “work” to avoid war.
He drew attention to the US killing of 290 civilian passengers on board Iran Air flight 655, shot down by the USS Vincennes during the “tanker wars” of the 1980s.
Tehran has repeatedly called for a return to negotiations with the US, but only if the US lifts economic sanctions first. This week there were signs that the Trump administration was preparing to make good on its offer to talk directly with Iran, without preconditions, reportedly tapping Senator Rand Paul as the man to make the overtures.
Onboard the Boxer, CNN asked Brigadier General Trollinger, the commander of the Task Force controlling the USS Boxer, if an apparently minor misstep by a junior sailor or Marine could have dangerous consequences — like a war?
“That’s absolutely accurate,” the general replied. “All the training we do, all the education we do is the express purpose of getting after that, to make sure that we eliminate or reduce rather… mitigate to the best of our ability … any risk of miscalculation.”
The alternative is almost unthinkable. But in complex negotiations, the trick is to convince the other that the unthinkable is an option.