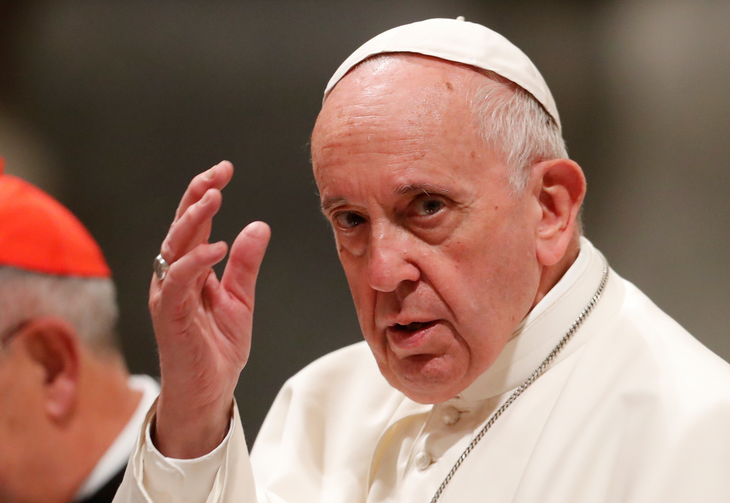 Pope Francis gestures as he addresses over 1,000 diocesan leaders, both clergy and laity, May 9, 2019, at the Basilica of St. John Lateran, the cathedral of the Diocese of Rome. (CNS photo/Remo Casilli, Reuters)

With his new motu proprio “Vos estis lux mundi,” Pope Francis shows that he is taking the abuse crisis very seriously. The new legislation came only months after the February 2019 abuse summit in Rome. The time and tone of the new law are revolutionary, yet the law is solidly grounded in tradition.

This new law is without a doubt a rare gift to the entire church and sets, along with the companion Vatican law providing for jail time for any public official of the Vatican who fails to report abuse, an unmistakable new course. The painful, sometimes bitter, experience of the church in the United States and the voices of the faithful worldwide have helped bring about a change in attitude and a change in law. There is no turning back now, and the tone has been set for the future.

Before looking at the new legislation, it is important to underscore that this new law is a procedural law, setting up a solid reporting system. The law does not establish new penalties. The penalties are applied after using this new procedure.

The new law focuses on three main points: mandatory reporting, the institution of the metropolitan model to investigate bishops and others who are in positions of authority, and the obligation to establish in every diocese and eparchy a stable and easily accessible system to report abuse and cover-up.

The new law actively encourages and promotes reporting of abuse committed by clerics and members of religious orders. The sexual abuse of minors or vulnerable adults, the possession or distribution of child pornography, the use of violence or intimidation to engage in sexual acts and the cover-up of such conduct are subject to the reporting requirement. The legislation recognizes the fact that abuse problems have existed not just among clerics under the competence of the Congregation for the Doctrine of the Faith but also in religious institutes. The new law offers whistle-blower protections for all reporters. That is simply revolutionary in canon law and guarantees that a victim who wishes to tell his or her story cannot be silenced.

The second major point of the legislation is the establishment of the metropolitan system to report abuse or cover-up by cardinals, patriarchs, bishops, papal legates and supreme moderators. The motu proprio requires that complaints get to Rome quickly and that investigations start within 30 days. The metropolitan approach preserves the universality of the church and the central role of the Holy Father but ensures that local church resources are relied upon to ascertain the truth. This also includes the potential involvement of qualified lay people to assist the metropolitan with the investigation. In fact, the legislation explicitly invokes Canon 228, which is rooted in Vatican II’s recognition of the critical role lay people can play. Because of the nature of sexual abuse crimes, lay people must now have a critical and central role in investigating cardinals, patriarchs, bishops, legates and supreme moderators. One of the extraordinary things about this new law is that if it is badly executed by the bishop responsible for the investigation, the bishop could find himself investigated for cover-up as well.

The obligation to establish in every diocese and eparchy a stable and easily accessible system to report abuse is the third major point of the new legislation. It offers a clear reporting mechanism to denounce abuse or cover-up by bishops and those targeted by the motu proprio.

In the preamble to “Vos estis lux mundi,” Pope Francis writes, “It is good that procedures be universally adopted to prevent and combat these crimes that betray the trust of the faithful.” A universal procedural law is indeed the appropriate answer. The pope also reminds us that we must not treat this as merely a technical positive law but that instead this must be accompanied by an ecclesial spirit, common purpose and conversion. The legislation needs to be implemented locally and in full, including in the United States.

There is no room to use the abuse crisis for ideological purposes. Some have argued that gay priests caused the abuse crisis and that therefore the crisis was limited to the church in the West. The promulgation of a universal law shows that the abuse crisis is not simply an American problem but concerns the whole Catholic Church. It is a problem of abuse of power, one that includes the abuse of girls, women and female religious. “Vos estis lux mundi” is a critical step forward in protecting all victims from the scourge of sexual abuse, not only in the United States but throughout the universal church.

Kurt MartensKurt Martens is an ordinary professor of canon law at Catholic University of America School of Canon Law and the editor of The Jurist.
@DrKurtMartens