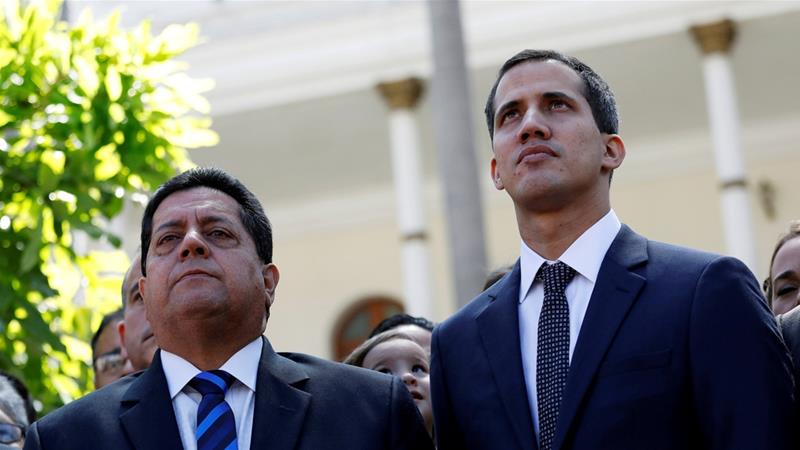 Venezuela is bracing for another day of nationwide protests following the arrest of Edgar Zambrano, a deputy speaker, and vice president of the opposition-majority National Assembly.

“This Saturday we will return to the streets to defend our National Assembly,” opposition leader Juan Guaido wrote on Twitter.

“We will go out [to defend] our brave deputies that are giving it all for a country that will continue mobilising until freedom is achieved,” he added.

Zambrano is being held in preventive detention for “the flagrant commission of the crimes of treason, conspiracy and civil rebellion,” the Supreme Court said in a statement announcing the verdict of a lower court.

The deputy was arrested by Maduro’s SEBIN intelligence service on Wednesday for supporting the revolt organised by US-backed Guaido.

Venezuela in crisis: All the latest updates

Earlier last week, Guaido tried to spark a military uprising to overthrow President Nicolas Maduro, but there were no widespread defections among soldiers and the plan fizzled out.

Maduro denounced it as a coup attempt.

Maduro also accused his sacked intelligence chief of being a CIA “mole” and the architect of the failed move.

He said General Cristopher Figuera was “the one who orchestrated the coup d’etat” by contacting a group of around 30 members of the armed forces who joined Guaido’s mass demonstration.

“He was captured by the CIA a year ago and was working as a traitor, mole and infiltrator,” Maduro said of Figuera, whose defection to the opposition saw him rewarded earlier this week by the US, which removed him from its sanctions list.

Zambrano is one of 10 charged by the Supreme Court for participating in the April 30 uprising.

He was transferred to the Caracas headquarters of the military police, Fort Tiuna, the court said.

“He was kidnapped by this government and taken illegally,” Soley Zambrano, the deputy’s daughter, told Al Jazeera.

“They talk about treason? He has been defending democracy in Venezuela because the National Assembly is the only democratic institution left in Venezuela,” she added.

One of the other charged politicians, Luis Florido, announced in a video on Friday that he had fled to neighbouring Colombia, “sheltered from a regime that is willing to imprison deputies,” he said.

Three others – Richard Blanco, Mariela Magallanes and Americo De Grazia – have sought refuge in the Argentine and Italian embassies in Caracas.

Zambrano’s lawyer Lilia Camejo denounced the procedure under which Zambrano, a civilian, was sent to a military prison, and said his rights had been violated.

“From the moment of the arrest, they have violated the deputy’s rights. We did not have access to the file, nor could we be appointed in his defence,” Camejo told reporters.

Guaido said on Thursday the arrests were part of a bid by Maduro to dismantle the National Assembly legislature, Venezuela’s sole opposition-controlled institution but one which had already been rendered powerless by the pro-Maduro Supreme Court.

“If we can talk about a coup d’etat in Venezuela, here it is; the dismantling of the national parliament,” Guaido told a news conference, accusing Maduro’s regime of “state terrorism”.

The increase in regime repression “may be a precursor” to targeting Guaido himself, said Latin American analyst Risa Grais-Targow of Eurasia Group.

“Zambrano’s arrest may be a test to gauge the response of the international community before it moves against Guaido.”

His arrest on Wednesday night was dramatic. The politician commented on events live on Twitter as they unfolded.

The 64-year-old’s car was surrounded outside his Democratic Action Party’s headquarters before it was towed, with him still inside, to the notorious Helicoide prison inside SEBIN headquarters.