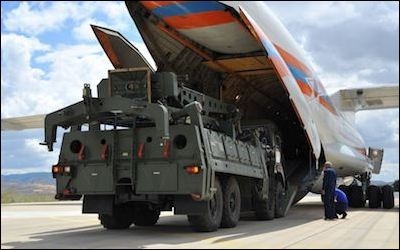 Components of Russia’s S-400 missile-defense system are unloaded near Ankara on July 12.

An emerging Russia-Turkey alliance in defense and energy will have long-term effects on the Middle East and Israel. This comes in the wake of Turkey acquiring Russia’s S-400 air defense system and the development of the TurkStream pipeline, which stretches across the Black Sea from Russia to Turkey.

As Turkey and Russia grow closer, they inevitably also grow closer in their efforts to end the Syrian conflict, as well as other regional and international issues. This has led Turkey away from its traditional alliance with the US, and focused on a new alliance structure with Russia and other allies, for instance, a Turkey-Qatar and Russia-Iran alliance, in which they share certain interests. In the long term, a closer block of Russia-Syria-Iran-Turkey-Qatar may emerge, alongside other powerful states such as China, India, and central Asian actors, some of which seek to challenge the US.

This has long-term implications for Israel because Israel is a close US ally that opposes the rising power of Iran in the Middle East. Israel enjoyed close relations with Turkey up until the mid-2000s when things soured under Turkey’s current administration. Russia and Israel enjoy good relations today, but what happens if their interests begin to not coincide in places like Syria, where tensions already exist?

Some recent headlines represent the growing alliance. The National Interest says that Turkey stockpiled F-16 parts prior to acquiring the S-400, knowing US relations would suffer. Russia has recently restored some visa-free travel from Turkey. Russia and Turkey are discussing joint production of civilian aircraft and helicopters. Tass News says that they may also begin joint exploration for energy in the Mediterranean.

Taken together, it is clear that a defense and energy alliance is growing. Israel has its own energy interests in the Mediterranean and its own defense relationships. The long-term effect of the Russia-Turkey alliance is in its infancy, but joint defense work and energy exploration should be taken more seriously by neighbors in the Middle East.