Spain has rejected a plan put forward by Germany and France aimed at establishing a mechanism to take in irregular migrants who arrive in the European Union. Madrid voiced its objection to the idea on Thursday given that it would be limited to migrants who arrive in Italy or Malta, and would not include Spain. This is despite the fact that since last year, the latter country has had to cope with the highest number of arrivals.

“Spain has no objection to temporary agreements, providing that they apply to the entire Mediterranean,” said Interior Minister Fernando Grande-Marlaska on Thursday during an informal meeting with his EU counterparts in Bucharest, according to sources familiar with the talks.

The EU has spent months trying to find a temporary solution to avoid episodes such as those recently seen in the Mediterranean, with NGO rescue ships stranded at sea with no European port willing to take them in. None of the initiatives mooted have so far prospered, but Spain had not before imposed an outright veto on a plan such as this last one.

There is a sense of weariness among Spanish lawmakers over the attitude of Italy, which has essentially closed its borders to irregular migrants, as well as the feeling that solidarity with Spain in terms of it coping with the influx of arrivals is limited among fellow EU member states.

The French-German plan was aimed at unblocking the EU migratory and asylum policy, which has been at a standstill since the 2015 refugee crisis. Successive proposals – from obligatory quotas to sharing out asylum seekers between countries, or the creation of closed camps for irregular arrivals – have all foundered.

The latest plan from Berlin and Paris involved a temporary solution, based on a mechanism for sharing out the migrants arriving from Libya. The participation in such a mechanism would be voluntary, and a handful of countries – the Netherlands, Portugal and Romania among others – as well as those who would benefit – Italy and Malta – appear willing to back the proposal.

But for Spain the plan is insufficient given that it excludes the area of the Mediterranean which is currently seeing the most arrivals. The route that leads to the south of Spain constitutes the biggest entry point for clandestine immigration to Europe, with an all-time record of 64,000 arrivals last year, according to data from the Interior Ministry.

Madrid also considers it unfair that the plan is designed to alleviate the migratory pressure on Italy and Malta, two countries that are refusing to comply with their international obligations. Marlaska reminded his colleagues on Thursday that on several occasions when Italy and Malta closed their ports to migrants, Spain agreed to take them in.

“Spain rescues [migrants] because it is obliged to do so,” the minister stated, as a clear reproach to those unwilling to do their part.

Despite the rejection by Spain, Brussels opted to back the plan launched by Paris and Berlin. During the meeting in Bucharest yesterday, the European commissioner for migration welcomed the fact that “Germany and France have taken a step toward making this temporary mechanism a reality as soon as possible.” In a post on Twitter, which included a photo of himself and the Spanish interior minister, he wrote that he had assured Grande-Marlaska that “Spain can continue to count on European support to tackle migration challenges and strengthen our cooperation with Morocco.” 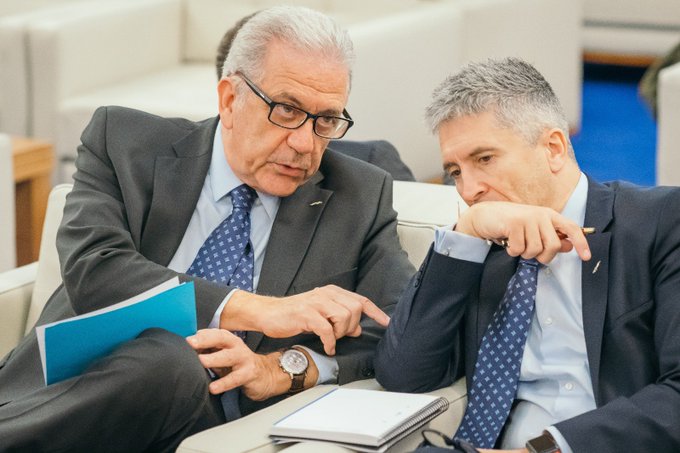 Meeting with the Spanish Minister of Interior Fernando Grande-Marlaska. I assured that Spain can continue to count on the European support to tackle #migrationEU challenges and strenghen our cooperation with #Morocco