URSULA von der Leyen today set out her plans for a united states of Europe in one final effort to convince MEPs to support her bid for the European Commission presidency.

Ms von der Leyen, a German defense minister, told MEPs she is ready to “fight” for Europe after becoming the first woman nominated to lead the Commission.

She told MEPs, in the European Parliament in Strasbourg, that the EU must take “bold steps together” in order to fight climate change, authoritarian regimes, and protectionism.

The 60-year-old added: “The founding fathers and mothers of Europe from ruins and ashes of the world war created a fantastic new world of peace with a stronger common market.

“Today is is clear we are going to have to fight, rise up for this Europe of ours, the whole world is called up upon.”

Wanting to display her pro-Brussels attitude, she claimed she knew she was a European citizen before understanding she was German.

Ms von der Leyen called for a renewed “unity” among EU countries in order to bring the bloc back to life under her leadership.

She warned that some member states are turning to authoritarian regimes and protectionism as an answer to the EU’s problems.

“We must first rediscover our unity, if we are united on the inside nobody will divide us from the outside,” she said.

“If we close the gaps between us, we can turn tomorrow’s challenges into tomorrow’s opportunities.” 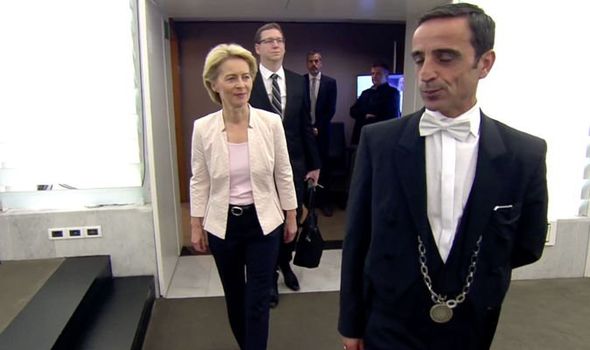 The Commission president-in-waiting requires the support of at least 376 MEPs, so set about trying to please individual political blocs in the Parliament.

She pledged to make the EU climate neutral by 2050 in a bid to secure the backing of the European Greens and to finalize the so-called “monetary union” in order to please those wanting for fiscal powers in Brussels.

In a bid to win the socialist vote, she offered a Europe-wide unemployment benefit to protect the EU’s citizens against the next economic “shock” to the bloc.

She said she would force member states to propose more women as members of her team of European commissioners.

Ms von der Leyen said: “I will ensure full gender equality in my college of commissioners.

“If member states do not propose enough female commissioners I will not hesitate to ask for new names.”

The German, who supports a united states of Europe, is also seeking to introduce a “common migration pact”, in a bid to protect the EU’s external borders.

At Brexit Party MEPs jeered, Ms von der Leyen said she was prepared to delay Brexit if Britain’s next prime minister has a “good reason”.

“For the first time in 2016, a member state decided to leave the European Union,” she said.

“This is a serious decision, we regret it but respect it.”

She added: “I stand ready for further extension of the withdrawal date should more time be required for a good reason.”

Ms von der Leyen promised to protect peace and stability on the island of Ireland by supporting the hated Nothern Ireland backstop.

At the end of her speech, she proclaimed: “Long live Europe.”