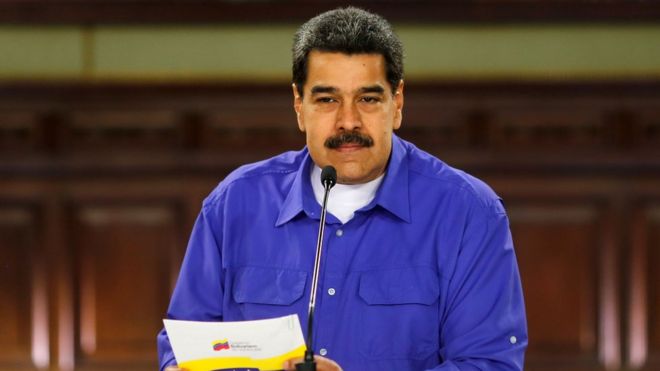 |
The Venezuelan leader has confirmed that he is in talks with the Trump administration. -AFP

Venezuela’s embattled President Nicolás Maduro said he had been in talks with the Trump administration for months, even as the US ramped up its sanctions.

The US is one of more than 50 nations which do not recognize Mr. Maduro as Venezuela’s legitimate leader.

On Tuesday, Mr. Maduro said that talks with the Trump administration had been going on for months.

But US National Security Adviser John Bolton said the only thing being discussed was Mr. Maduro’s departure.

Speaking on television, Mr. Maduro said: “Just as I have sought dialogue in Venezuela, I have sought a way in which President Trump really listens to Venezuela.”

President Trump confirmed on Tuesday that his administration was “talking to various representatives of Venezuela”.

“I don’t want to say who, but we are talking at a very high level,” the US president said.

Mr. Maduro had suggested that he authorized the back-channel discussions.

But Mr. Bolton cast those contacts in a very different light, tweeting that the “only items discussed by those who are reaching out behind Maduro’s back are his departure and free and fair elections”.

As the President has repeatedly stated, to end the pilfering of the Venezuelan people’s resources and continued repression, Maduro must go. The only items discussed by those who are reaching out behind Maduro’s back are his departure and free and fair elections.

The US imposed sweeping sanctions earlier this month aimed at increasing pressure on President Maduro to step down.

What is the situation in Venezuela?

The country has been caught up in a struggle for power between President Maduro and the leader of Venezuela’s National Assembly, Juan Guaidó.

Mr. Guaidó declared himself interim president in January, claiming that the elections which brought Maduro to power for a second term were fraudulent.

While Mr. Guaidó has gained the backing of over 50 countries he has so far failed to remove Mr. Maduro from power.

Talks between the two sides hosted by Barbados and mediated by Norway recently stalled after President Maduro denounced the opposition for backing the sweeping sanctions imposed by the US.

The country is suffering one of the worst economic crises in history with a quarter of its 30 million population in need of aid, according to the United Nations.

More than four million Venezuelans have left the country over the past years.

Why is the US involved?

Mr. Maduro’s government has come under fire by the international community for a number of reasons.

When opposition parties gained a majority in the country’s National Assembly, the president created a rival body stacked with his supporters which assumed many of its powers. His 2018 re-election was controversial and labeled as rigged by his critics after many rivals were barred from running or fled the country.

Protests and demonstrations erupted into violence and were met with a crackdown by authorities which saw civilians killed.

The US has been a frequent target of Mr. Maduro’s anger.

Mr. Maduro has accused the US, and John Bolton in particular, of trying to kill him, without supplying any evidence. He claims that his opposition is backed by foreign powers, rather than a domestic resistance to his authority.

Government officials were the first target of US sanctions against Mr. Maduro’s government – but earlier this year, it brought new restrictions forward on the state oil company, which is a major player in the national economy.

That was followed in August by sweeping sanctions that froze all property of the government in the US and blocks American firms doing business with Venezuela.