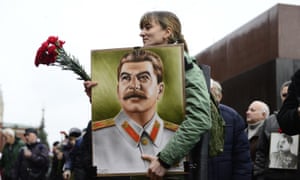 ‘An image of Stalin as a strong leader who ensured victory in the second world war and helmed a superpower has re-emerged.’ A celebration of Stalin’s birthday, Moscow 2015. Photograph: Anadolu Agency/Getty Images

Great expectations characterized 1989. In Russia, the rock band Kino sang “We are waiting for changes!” In huge public rallies on the streets of Moscow, millions demanded freedom and democracy. The Gorbachev era brought about a frenzy of change, and people witnessed incredible events on a weekly basis: they snatched up newspapers, hung on every word broadcast on TV, and with every passing day they felt more alive and free.

Many also understood that to change the rotten Soviet system one had to know the truth about its Stalinist past. It was the year the human-rights organization Memorial was founded, bringing together hundreds of activists from across the Soviet Union. Some of them had experienced life in the gulags. Some were dissidents who had recently returned from labor camps or places of exile, such as the nuclear physicist Andrei Sakharov. The mission was clear: we would bring back the memory of Stalin’s victims and make it public.

In the spring of 1989, something happened that I could never have imagined in my wildest dreams: I was invited to the history and archives institute in Moscow to give a talk to students on the fates of former gulag prisoners. Afterward one asked me if I had ever met a real-life Stalin supporter. My first reaction was to laugh, but then I paused and wondered: had we finally reached a point in time when 20-year-olds thought no Stalinists existed anymore? Thirty years on, I recall that moment with a bitter feeling.

In the early 1990s, visitors flocked to the small house where Memorial had its offices. They brought documents, memoirs of prisons and labor camps, letters from gulags, and little notes that had been thrown from freight cars in transit and had miraculously reached their intended recipients. Other objects from the gulags included plywood labor camp trunks, quilted prison jackets with inmate numbers, jagged spoons and bowls. Visitors brought handwritten books, embroidery, drawings and watercolors that they had managed to hide during searches of their cells. This led to the creation of an archive at Memorial, a collection of thousands of fragments of family memories.

At the time we thought this was only the beginning of a long process and that our new political leaders had realized that getting to grips with the past was a key task. But the reformers lacked interest in history; they were in a rush to build a market economy. They didn’t see the link between successful economic reforms and the need for a vibrant civil society. Boris Yeltsin’s government would mention Soviet political repression only ahead of elections in order to fend off the Communists.

Soon enough, in the grip of severe economic crisis, “democracy” became a dirty word for many Russians. They were disappointed and felt reforms were never truly accomplished. Russian society succumbed to weariness and indifference. Stalinist crimes, once thought better out in the open, had turned out to be so horrific that people didn’t want to spend time thinking about them. 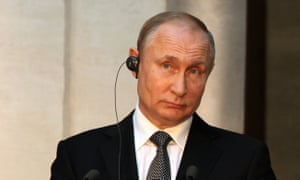 ‘Vladimir Putin has called the fall of the Soviet Union ‘the greatest geopolitical catastrophe’ of the 20th century.’ Photograph: Marco Ravagli/Barcroft Media

By the mid-1990s, nostalgia for the Soviet period started to creep in. The greyness of the Brezhnev era, with its endless queues and empty shops, started to be recalled as a peaceful, prosperous time. And gradually something that had seemed impossible during perestroika, became real: Stalin’s shadow loomed large again.

Vladimir Putin’s rise to power came accompanied by a new version of patriotism relying on “heroic” and “bright” aspects of the Soviet past. An image of Stalin as a strong leader who had ensured victory in the second world war and led a Soviet superpower re-emerged. Television propaganda again worked hard to create that image. The millions who perished in waves of political repression were pushed to the margins of collective consciousness.

Today, the 1989 liberation of eastern Europe, the fall of the Berlin Wall and the end of the cold war are understood by many Russians in terms of defeat, a disaster even. No wonder, given that Putin has called the fall of the Soviet Union “the greatest geopolitical catastrophe” of the 20th century. Today Stalin’s face watches you ubiquitously from billboards, subway train walls, and bookstore windows. Dozens of monuments to him have sprouted around Russia.

It’s not that Russians have forgotten about the direct link between Stalin’s name and the political repression that affected almost every family. Rather, they don’t want to reflect on the terror, on who perpetrated it or what the rationale behind it was. They aren’t ready to acknowledge that this was the central pillar of the entire system.

The current glorification of our victories and the whitewashing of Stalin have become possible because today’s Russia has, in fact, no concept whatsoever of the future. What kind of country do we want to live in? A country that “has risen from its knees” and follows its own, unique path? But what is that path? Kremlin ideologists have failed to map any of this clearly.

It is difficult today to recall 1989 without a deep feeling of lost opportunity and shattered hope. In the early Putin years, a silent majority traded the possibility of freedom for promises of “stability”, and later for the national pride of “great Russia”, a power that draws borders around itself and feels like a besieged fortress.

Every day our freedom seems to shrink as quickly as it expanded 30 years ago. Memorial is effectively the only organization that for decades, tirelessly, and without any governmental support, has worked to preserve memory. In 2016 authorities branded it a “foreign agent”, just like dozens of other NGOs. Yury Dmitriyev, one of our historians from the region of Karelia, has been in prison for almost three years on trumped-up charges, and human rights activist Oyub Titiev has been persecuted for his work in Chechnya.

Still, there are forces in Russian society that resist. People want to learn the fate of their ancestors. Memorial, just like so many years ago, is again receiving support from many quarters. More volunteers join in, more young people engage in our initiatives and despite all the obstacles put up by authorities, new projects are launched, exploring historical memory.

History will not be completely rewritten. Putin may be a focus of much concern across the world, but in Russia, it is obvious to many of us that our country’s return to democracy will be impossible as long as we fail to condemn Stalin and the system he created.

This article was translated from the original Russian by Nina Rozhanovskaya

• Irina Sherbakova is a historian, author and founding member of the human rights organization Memorial