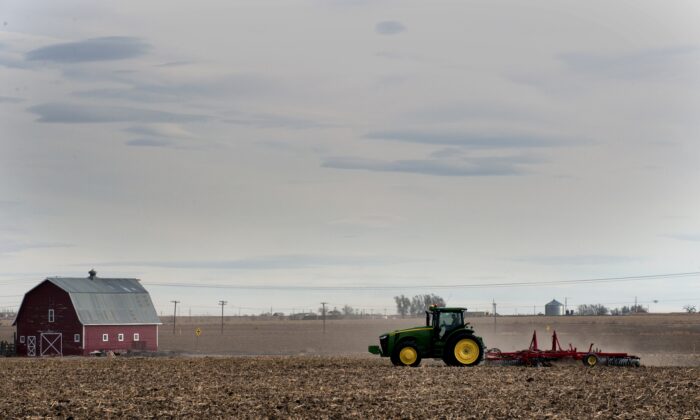 A farmer plows his fields in the small northeastern agricultural town of Eaton, Colorado, on Feb. 10, 2017. With a population of just over 5,000 residents, 71% of the town’s registered voters cast their ballots in support of President Donald Trump during the 2016 U.S. presidential election. (Jason Connolly/AFP via Getty Images)

China’s tariffs targeting President Donald Trump’s rural base have boomeranged with farm income hitting a 5-year high of $88 billion and in the top 30 percent after inflation.

China was very aware the key to Trump’s 2016 presidential victory was the 11 percent collapse of Democrat voting in rural districts that fell from 45 percent in 2008 to 34 percent in 2016. The only demographic Hillary Clinton won was metropolitan cities with over a million population that she won by 55.4 percent to Trump’s 40.1 percent.

As documented by a recent study from the National Bureau of Economic Research, China used targeted trade war tariffs to specifically interfere with the political outcomes of the U.S. House of Representatives 2018 midterm elections. The NBER demonstrated that tariffs focused on U.S. election competitive “battleground” counties and caused “3.8 percentage point decline in consumption growth” in 2017 and 2018.

The U.S. media has relentlessly highlighted U.S. Courts Chapter 12 data for the 12-month period ending September 2019 that reported farm bankruptcies totaled 580 filings, up 24 percent from the prior year and the highest level since 676 filings in 2011.

The American Farm Bureau Federation did report that U.S. agricultural exports declined by about 5 percent to $78.5 billion in the twelve months through July 2019. But the Trump administration’s $117 billion in U.S. tariffs is funding $33 billion of trade tariff assistance, disaster assistance, farm bill and insurance indemnities that will flow to farmers and ranchers by year-end. As a result, Chapter 12 bankruptcies decreased by 2 percent in the third quarter of 2019.

The Trump administration has been aggressively unwinding the Obama administration’s 3,900 Environmental Protection Agency rules that the ‘Americans for Tax Reform’ estimated would cost mostly rural interests about $50 billion in annual compliance costs.

In spite of the Sino-U.S. trade war, agricultural prices are generally higher since President Trump took office in January 2017, with soybeans down 7 percent; corn up 2 percent and wheat up 24 percent. But with African swine fever expected to kill off over half of China’s 425 million hogs, pork prices are up by 34 percent.

The trade war also helped the Trump administration push through the 2018 Farm Bill as a path forward in the multi-billion revival of industrial hemp suspended since 1950. The USDA on Oct. 29 issued its regulatory final rule to launch the market.

Although China made promises in mid-October that it will buy $50 billion in farm products in a “Phase 1” trade truce, the Colorado Springs Gazette found most farmers still expecting the Chinese to continue using non-tariff barriers to discriminate against U.S. exports. But Montana farmer Michelle Jones commented that if a deal is signed for $40 to $50 billion: “That far exceeds what they’ve ever bought from us before and having a dollar amount like that in a trade deal, for me, it’s managing trade.”

With booming cash flow, rising prices and the potential for a mega-export deal with China, agricultural optimism kicked into high gear in September with total U.S. monthly farm tractor sales up 18.7 percent and self-propelled combines sales up 12.3 percent, according to the latest data from the Association of Equipment Manufacturers.

The U.S. economic boom has largely been ignored by ABC, CBS, and NBC television with 92 percent negative Trump reporting. But this probably reflects the 15 point Democrat advantage in large urban settings. The Rasmussen Daily Presidential Tracking Poll reports Trump running mostly ahead of Obama since March 2018.

The depth of the Chinese failure in targeting Trump’s rural agricultural base was revealed in a recent “Change Research” survey sponsored by The American Federation of Teachers and “One Country,” a group with close ties to former Sen. Heidi Heitkamp (D-N.D.), who was successfully targeted in the 2018 Trump mid-term campaigning. The progressives’ survey found that 60 percent of voters from non-metropolitan counties in Colorado, Michigan, Minnesota, Montana, North Dakota, Ohio, Pennsylvania, Wisconsin, and West Virginia approve of the job Trump is doing.

Chriss Street is an expert in macroeconomics, technology, and national security. He has served as CEO of several companies and is an active writer with more than 1,500 publications. He also regularly provides strategy lectures to graduate students at top Southern California universities.