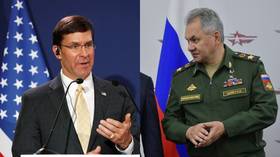 US Secretary of Defense Mark Esper called his Russian counterpart Sergey Shoigu on Monday, as US President Donald Trump announced the US pullout from northeastern Syria. No details of the call were given by either side.

Pentagon’s outreach comes amid a firestorm of criticism in the US over Trump’s decision to withdraw, with people on both sides of the aisle depicting it as a “betrayal” of Washington’s Kurdish allies. Opponents of the withdrawal claim that it will open the door to Turkey – a NATO ally of the US – to attack the Kurds, whom the US enlisted to fight against Islamic State (IS, formerly ISIS) in northeastern Syria.

The previous administration also sought to use the Kurds as the embryo or a US-aligned administration in Syria, controlling the country’s oil resources and facilitating plans for regime change in Damascus. Meanwhile, Russia has supported the government of President Bashar Assad as the only legitimate and internationally recognized authority.