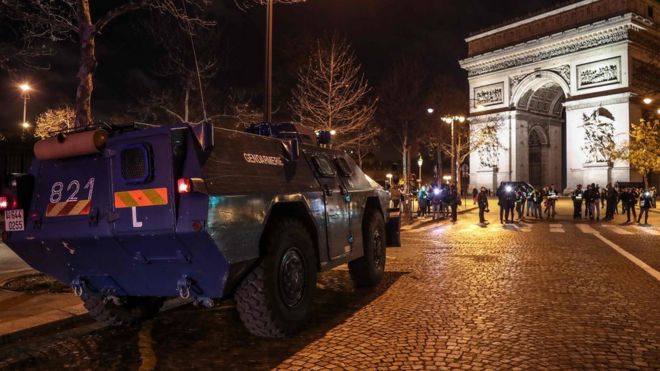 France is braced for renewed anti-government protests, with nearly 90,000 security personnel on the streets.

Some 8,000 officers and 12 armoured vehicles have been deployed in Paris alone, where shops are boarded up and sites like the Eiffel Tower closed.

Thirty-two people have been detained in Paris but the streets are so far calm.

The “yellow vest” movement began three weeks ago in opposition to a rise in fuel tax but ministers say it has been hijacked by “ultra-violent” protesters.

Last week, hundreds of people were arrested and scores injured in violence in Paris – some of the worst street clashes in the French capital for decades.

What is happening this weekend?

Paris streets appear to be quieter than on previous Saturdays.

A few hundred people gathered on the Champs-Elysées and marched a short distance to a police cordon where they stopped. The mood so far appears calm.

Le Monde journalist Aline Leclerc tweeted (in French) that there were fewer protesters, and that police were searching bags and confiscating items such as helmets and spectacles.

She said that the demonstrators were mostly men aged between 20 and 40, with women and older men apparently put off by the threat of violence.

The BBC’s Hugh Schofield, on the Champs-Elysées, says he was told by protesters that their masks, used to protect against tear gas, had also been removed by police.

Media reports say 32 people have been detained at railway stations and in the streets. Police said nearly 300 people had been stopped for identity checks.

About 65,000 security officers were deployed across the country last weekend, but that has been increased to 89,000, even though Interior Minister Christophe Castaner said he expected fewer protesters than last weekend, perhaps about 10,000 nationwide.

“Ten thousand is not the people – it’s not France,” he said.

The security forces will want to prevent a repeat of last weekend in the capital, where the Arc de Triomphe was vandalised, police were attacked and cars overturned and burned.

He said: “According to the information we have, some radicalized and rebellious people will try to get mobilized. Some ultra-violent people want to take part.”

The barricade-smashing armoured vehicles have not been seen in the Paris area since riots erupted in poor suburbs in 2005.

Mr Castaner added: “These past three weeks have seen the birth of a monster that has escaped its creators.” 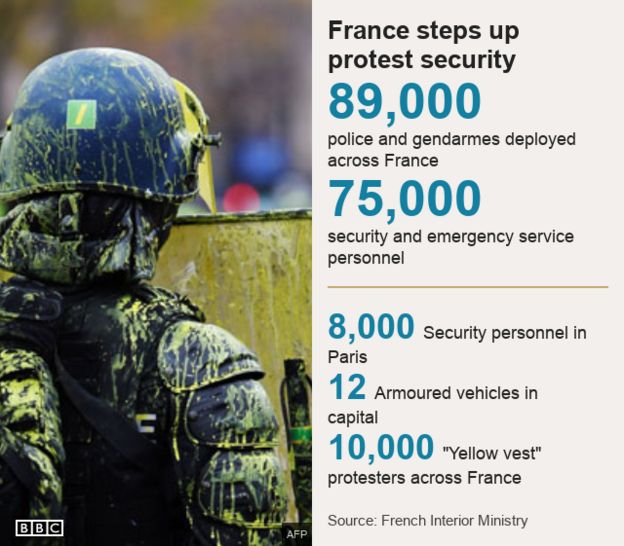 Some calls on social media for attacks on police and the Élysée palace in an “Act IV” drama have been unnerving.

One MP, Benoît Potterie, received a bullet in the post, accompanied by the words: “Next time it will be between your eyes”.

Six matches in the top tier of France’s football league have been postponed. The Louvre, Musée d’Orsay and other sites are closed in Paris.

Mayor Anne Hidalgo issued a plea: “Take care of Paris on Saturday because Paris belongs to all the French people.”

Where are we with the yellow vest movement?

The “gilets jaunes” protesters are so-called because they have taken to the streets wearing the high-visibility yellow clothing that is required to be carried in every vehicle by French law.

The BBC’s Lucy Williamson in Paris says that over the past few weeks, the social media movement has morphed from a protest over fuel prices to a leaderless spectrum of interest groups and differing demands.

Its core aim, to highlight the economic frustration and political distrust of poorer working families, still has widespread support, our correspondent says.

An opinion poll on Friday showed a dip in support, but it still stood at 66%.

Prime Minister Édouard Philippe met representatives of the movement on Friday to try to start a dialogue.

The seven protesters who attended welcomed the gesture. They were moderates who have urged protesters not to descend on the capital.

One of them, Christophe Chalençon, said he hoped President Emmanuel Macron would “speak to the people of France as a father, with love and respect and that he will take strong decisions”.

President Macron’s ratings have fallen amid the crisis, and he is planning a national address next week, his office has said. Some have criticised him for being too low-profile.

On Friday, he visited a police barracks outside Paris to show his support.

What has the government conceded?

The government has said it is scrapping the unpopular fuel tax increases in its budget and has frozen electricity and gas prices for 2019.

The problem is that protests have erupted over other issues.

Granting concessions in some areas may not placate all the protesters, some of whom are calling for higher wages, lower taxes, better pensions, easier university requirements and even the resignation of the president.

He has been called by some “the president of the rich”.