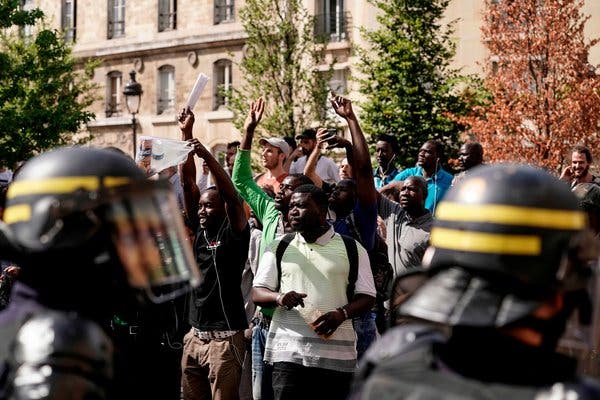 PARIS — Hundreds of undocumented migrants stormed the Panthéon monument on Friday, demanding that the French government pay more attention to their plight and grant them legal status.

The protesters, many of whom were from West Africa, called themselves “Black Vests,” an allusion to the recent anti-government “Yellow Vests” protests. They surged the memorial in the early afternoon, where luminaries such as Victor Hugo, Voltaire and Simone Veil, champions of human rights, are buried.

Occupying the memorial for a couple of hours, they sat peacefully under the monument’s dome, waving papers and chanting, “Black Vests, Blacks Vests” and “Solidarity with migrants.”

“We are undocumented, the voiceless and faceless of the French Republic,” read a leaflet shared by La Chapelle Debout!, an advocacy organization for migrants and refugees. “We come to the graveyards of your great men to denounce your desecration.”

As France has grappled with an increasing number of asylum requests in recent years, it has closed its border with Italy, fought illegal immigration in cities like Calais and adopted tougher policies against migrants. Yet studies show that immigration issues remain a top concern among the French, just as they do in other Western European countries like Germany or Italy.

The situation has been tense in France’s largest cities. Since the immigration crisis of 2015, Paris has been struggling to house migrants, who live in appalling conditions in the northern and eastern parts of the city, where there are not enough shelters. “The situation is unacceptable,” Mayor Anne Hidalgo of Paris, said in April.

She and the mayors of 12 other cities urged the government to provide temporary accommodation centers. Between 700 and 1,200 migrants slept on the streets of Paris in March, according to figures released then by the city. That figure is not thought to have changed significantly because the city has provided no new numbers since then.

The protesters — many of whom live in the Paris region in migrant shelters, in precarious hotels or on the streets — have staged other protests during the past few months.

In May, hundreds of “Black Vests” protesters occupied a terminal at Roissy-Charles de Gaulle Airport to denounce the “collaboration of Air France” in the repatriation of undocumented migrants to their countries of origin. In June, they stormed the entrance hall of a catering services group in the financial district of Paris, claiming that the company, Elior, exploited undocumented migrants.

On Friday, protesters were evacuated by the police a couple of hours after they surged the Panthéon. Videos on Twitter showed protesters sitting in the streets around the monument’s plaza, an area popular with tourists and students on the city’s Left Bank. Some chanted: “What do we want? Documents!” Others were seen being arrested by the Paris police.

The far-right leader Marine Le Pen called the occupation unacceptable. “In France, the only future for any illegal immigrant should be getting kicked out, because that’s the law,” she wrote on Twitter.

A lawmaker from the far-left party France Unbowed, Eric Coquerel, and a Green Party senator, Esther Benbassa, supported the movement. “We can’t keep having such a restrictive immigration policy, with a reception that doesn’t stand up to the humanitarian principles that France accustomed us to,” Ms. Benbassa said in front of the monument.

Since he was elected in 2017, France’s president, Emmanuel Macron, has vowed to tackle illegal immigration and to contain an ever-increasing number of asylum requests — more than 122,000 in 2018, up from 100,000 in 2017 and from 85,000 in 2016. With a tough approach to migrants, he has also tried to head off any progress of the far-right and anti-immigration National Rally, which won the most seats of any French party in the European elections in May.

From an asylum outpost in Niger, a hub for African migrants, France has aimed to discourage would-be migrants tempted to try a perilous journey toward Europe and France. To those coming from West African countries deemed safe by France — Benin, Senegal, Ghana — chances to be granted asylum are slim. Many others can linger for months before receiving an answer.

But the most stringent measure has been an asylum and immigration law passed in 2018 that human rights organizations and lawmakers in Mr. Macron’s own party have denounced as too harsh on migrants.

Migrants who enter France illegally now have 90 days to apply for asylum under this law, down from the 120 they had before the new law. Rejected applicants now have 15 days to appeal instead of a month, while those deemed ineligible can be held in “administrative detention” for 90 days instead of 45, before being expelled.

Interior Minister Christophe Castaner said in November that the number of deportations in 2018 increased by 20 percent from 2017.

A version of this article appears in print on July 12, 2019, Section A, Page 9 of the New York edition with the headline: Migrants Protest at the Panthéon Monument in Paris in a Push for Legal Status. Order Reprints | Today’s Paper | Subscribe

As the number of foreigners in Germany has risen, so have welfare payments dispensed to...